The first camping adventure of 2010 was a blast. The weather was a wonderful 84+ degrees each day which allowed the children to swim several times a day. Sun screen was a must-have that weekend.

Frost Ridge, formerly known as Lei-Ti, is in it’s second year of new management. The changes to the campground are noticeable. The bathrooms were remodeled and a laundry facility is being built.

The camp sites were clean, but could have used a little raking after the grass was cut. And, the schedule of activities could have been better. The comfy lounge was great and served as a safe place for teens to hangout during the evenings.

It was fun to see the campground get involved in the wet-n-wild wagon ride on Saturday. Sites where there were no children had spray guns and buckets of water ready and waiting. Imagine, an hour of screaming and yelling. It was great. A rematch was scheduled for Sunday.

As with previous years, the campground was packed and children were everywhere. There were two nights of live music. The live bands played mostly country music. I asked myself several times why the live bands at campgrounds mainly country bands. It’s one thing to be the only black family at a campground, but to have to listen to songs about living in a hick town and being a red-neck is a bit too much for me. 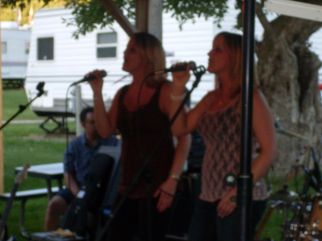 Luckily, the Morgan Twins from the second season of American Idol, honored us with a great rendition of Fallin’ by Alicia Keys.

I was not thrilled the campground was open to the public for the music. There was a lot of drinking, smoking, and partying. That led to the need to keep the kids close by and I started thinking about changing our Memorial Day camping spot. A plus was the campground made sure the partying was done right when the curfew began.

We ended each night around the campfire with s’mores and hot dogs. You can see photos from this trip here.

Overall, I do recommend this campground!

Last July I purchased a wine and beverage chiller for my husband. It can chill cans and bottle in minutes by spinning the beverage in cold water and ice. The chiller continuously sprays cold water on the beverage while it spins. There’s also a setting for extra chilling. A 12 oz soda can will chill to 43 degrees from 77 degrees in about 1 minutes. How cool!

A good insulated cooler will save you some money. I like to have one cooler each for beverages, meats, and food containers that don’t fit in the fridge. You want a cooler that will keep ice for 5 days in temperatures up to 90 degrees. You’ll save money on ice. Ice may be inexpensive in your local grocery store, but ice from the campground general store may cost you double.

When a good insulated cooler keeps your beverages cold, the drinks go faster. Depending on the size of your camping party, you can go through a lot of beverages. Say you’re in the mood for a super-cold Pepsi and the cooler is empty because no one replenished the cans. There’s a case of warm Pepsi on the ground. What do you do? Most likely, you would go to the campground store and buy an over-priced bottle of Pepsi. But if you have a beverage chiller, you place the can in the chiller. One minute later, you have a cold one.

I’ll be using my chiller for soda and bottled water. What would you use yours for?

We are almost ready for our first camping trip of the season. We pulled the RV out of storage and did a little dusting and wiping. I left a bag of nuts in the camper and guess what? A critter found it and went to town! If you read this and know my kids, please DO NOT mention the critters. They may not want to walk into the camper. My kids are finicky like that.

I have no idea how this little critter got into the camper, but this was our first break-in. I think it was a field mouse. No damage was done to the camper. Only empty peanut shells – everywhere. The positive side of this is that we helped one of God’s creatures eat good for the winter! But I know one thing is for sure; it won’t happen again. I’ve made it my personal battle to scour that RV before it’s put on lock-down this fall.

But having to only to do a little prep work makes camping so much easier. Last year, we purchased items for the RV. We only have to pack the food, clothes, and linens.

Speaking of linens, this year I plan to pick up some towels and sleeping bags specifically for the camper. Then, it’s simply wash what’s dirty and throw it back into the RV. Yes. I love camping and look forward to a great season.

Have you ever made a decision and then you’re itching to get things moving? Well, that’s how I feel about joining the camping club called The National African American RV Association (NAARVA). What does a girl have to do to be down with the club?

Okay. So it’s been only one day and I need to slow my jet. You see…I’m just excited about being able to connect with some cool campers. I don’t know them, but I have a close friend who has hung out with this group. If she says they’re cool, they must be. Right? Yes. And that’s that. So I’m going to relax and be patient.

This camping club, NAARVA, was formed in 1993. Their first outing consisted of 165 RV’s. Can you imagine? The club is nationwide and broken into four regions. Each region has between 5 and 17 chapters.

I really wanted to avoid an official membership club, but this seems to be the way to go for now. No matter how much my friends hear about me and my family camping, it’s still just ‘us’ out there. So I’m thinking joining this group will support our statements that black people do camp.

I’ll keep you updated on my progress. In the meantime, feel free to check out NAARVA here.

This morning, Will picked up the camper and took it to the dealer to get it winterized. We wanted to do it ourselves, but did not get a chance to purchase an air compressor. Winterizing the camper is the final ending to a camping season. I’ve already starting dreaming of our first trip in 2010.

Once the camper has been pumped through and through with anti-freeze, we’ll bring it home and give it one final cleaning. We need to make sure all the food is out. The last thing we want is to find in the Spring is critters.

We place dryer sheets all over the floor of the camper. We were told that this deters critters. Not sure if it truly works; however, there were no critters this Spring. Also, the camper smelled great.

Friday is our first day out for the season. But Star Trek comes out on Friday. I’m not big on seeing movies the day they come out – unless it’s Star Trek.

Because it’s Mother’s Day weekend, my wonderful hubby asked me to take the entire day off from work. Why? He’s taking me to see Star Trek while the kids are in school.

What a way to start the camping season!

I’m so excited. The kids are asking about camping. I tell you – when there’s warm weather, the kids think we should be camping.

My kids don’t know life without camping. We started camping when our eldest son was 4 years old. He’s going to be 15 soon. I’ve camped while pregnant with my second and fourth child.

We make it fun for them because the last thing I want is for them to grow and not want to take their own families camping. Too many times I hear people say “No way. I did that with my parents when I was younger.”

My dream is to have a Class A RV. I want to be able to travel across the country with my children and grandchildren. Okay…I know!! I have a long way to go. No grandchildren in the near future. My children are still babies. But can’t a girl dream?